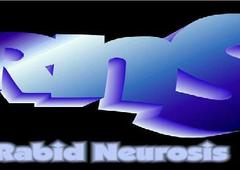 RNS (Rabid Neurosis) was one of the earliest mp3 groups, founded on June 6, 1996 by vATo (later called BonethuG) and N0fX. They began life as a traditional warez group with the aim of bringing out 'quality foreign games' but began releasing mp3's in August 1996. Therefore despite pre-dating both CDA and DAC in regards to formation date, those two groups began releasing music before RNS.

Although their first official release is widely believed to be Ride the Lightning by Metallica, released 12th October 1996, in actual fact RNS had already released several hundred single songs by that point, evidenced by releases such as this (their second release).

Initially, Rabid Neurosis focused their efforts (as did CDA and DAC) on ripping older releases and requested albums; 0-day or pre-release albums would not become commonplace until around '98. The group quickly developed a rivalry with CDA and the two groups were involved in several disputes throughout '96 and '97, including IRC channel takeovers and trashing of FTP sites. When CDA closed their doors in late '96 (the group would return the following year), RNS took over as the dominant MP3 group, a title that would stay with them for much of their subsequent operating years.

Rabid Neurosis (and the other mp3 groups at the time) operated publicly; offering their releases through IRC channels and public FTP/BBS servers, until the NET Act of 1997 was passed. Prior to the NET Act, criminal copyright infringement required that the infringement was for the purpose of "commercial advantage or private financial gain. The NET Act, introduced December 1997, changed this; putting warez groups at risk. As a result, RNS closed their public IRC channel, FTP servers and BBS systems and even ceased operations for a short period in the beginning of 1998, though later reopened their IRC channel.

Since their beginnings, the group took pride in offering a variety of genres - though had a particular interest in popular hip-hop/R&B. In 1998, key rippers were recruited from a recently-started group called HNA. Of particular note was Havok, who had scored many pre-releases for HNA and became instrumental for RNS, later running their ripping team. The leader of HNA - Kali, also involved with the game release group Class - was left without significant rippers and so dissolved the group, later joining RNS himself.

By mid '98, RNS - and their main competitors, aPC (and later EGO) - had become interested in pre-releases, essentially creating the 0-day MP3 scene that exists today. The two groups quickly developed a strong rivalry, often insulting each other in release NFOs. Many popular releases were ripped by both groups, resulting in nuke wars (both groups held considerable power by this point).

In 1999, the leader of RNS at the time - Al Capone - retired from his position and was replaced by Kali, who pushed RNS to score even more pre-releases, as well as making the group more secretive to outsiders. Later, Al Capone would post a public letter on the Rabid Neurosis website, condemning the state of the MP3 scene.

After their group was mentioned in an MTV News article about the early leak of the Eminem album Encore in 2004, RNS stopped including their initials in filenames and ID3 tags, a move that would eventually be copied by most other MP3 groups.

Rabid Neurosis ceased operations in 2007; their last release being Fall Out Boy's Infinity on High, released on January 19, 2007. In 2009, several members of the group were indicted by the United States Department of Justice for conspiracy to commit copyright infringement, including Kali, leader of RNS from 2000 onwards, and cHemo, a member of the group since '98 and affiliated with the art group SAC. Both were later found not guilty.