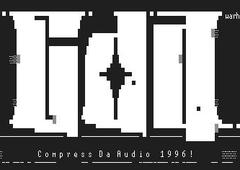 Compress 'Da Audio was one of the earliest mp3 groups, founded on 12th August 1996 by NetFraCk and shortly followed by DAC and RNS respectively. Their first release was Until it Sleeps by Metallica, ripped by NetFraCk himself on August 10th 1996. Although they are often cited as the first mp3 group, a number of first-hand accounts instead accredit Digital Music Audio (DMA) with this title.

Prior to mp3, a music warez scene would have been prohibitive due to the filesizes of uncompressed Wavs coupled with the slow connection speeds at the time. The mp3 codec had been in development for several years and the first encoder, l3enc, was released in 1993, with the first MP3 software player, WinPlay3, arriving the following year. NetFrack stumbled upon this process and formed Compress 'Da Audio with the intention of focusing on releasing popular music in the mp3 format.

Since the mp3 format was still relatively unheard of at the time, CDA held a monopoly for a while. Initially, a number of siteops were dismissive of the new format - refusing to accept the files on their sites. By the end of '96 however, a flourishing scene had developed, with a number of active mp3 groups, courier groups and sites emerging - the 2 most important sites at that time being NetFrack's The Abyss and World Domination.

At the end of '96, NetFrack left Compress 'Da Audio and a battle for presidency ensued. This would cause the first of 2 disbandings and many members left to join competing groups such as RNS. However, CDA would reform a few months later and a bitter rivalry with RNS ensued. The group continued operations until late '97 when it disbanded for good.